Driving from Sligo to Bundoran you wont help but notice a huge swarm of coaches of American tourists, but it is worth, walking straight past them and past the coffee shop that is almost in the graveyard and into the left you will find the resting place of WB Yeats.


Yeats died at the Hôtel Idéal Séjour, France, on 28 January 1939. It was his wish to have a quick funeral so he was buried there and moved to Sligo a year later his wife said these were his words "His actual words were 'If I die bury me up there [at Roquebrune] and then in a year's time when the newspapers have forgotten me, dig me up and plant me in Sligo'." 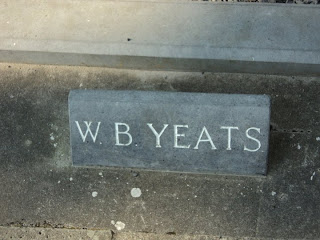 Under bare Ben Bulben's head
In Drumcliff churchyard Yeats is laid. An ancestor was rector there Long years ago, a church stands near, By the road an ancient cross. No marble, no conventional phrase; On limestone quarried near the spot By his command these words are cut:  Cast a cold eye On life, on death. Horseman, pass by! 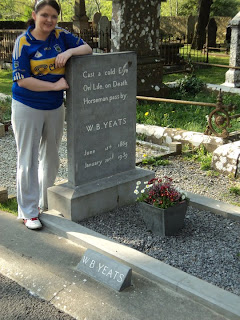 Friends of the blog